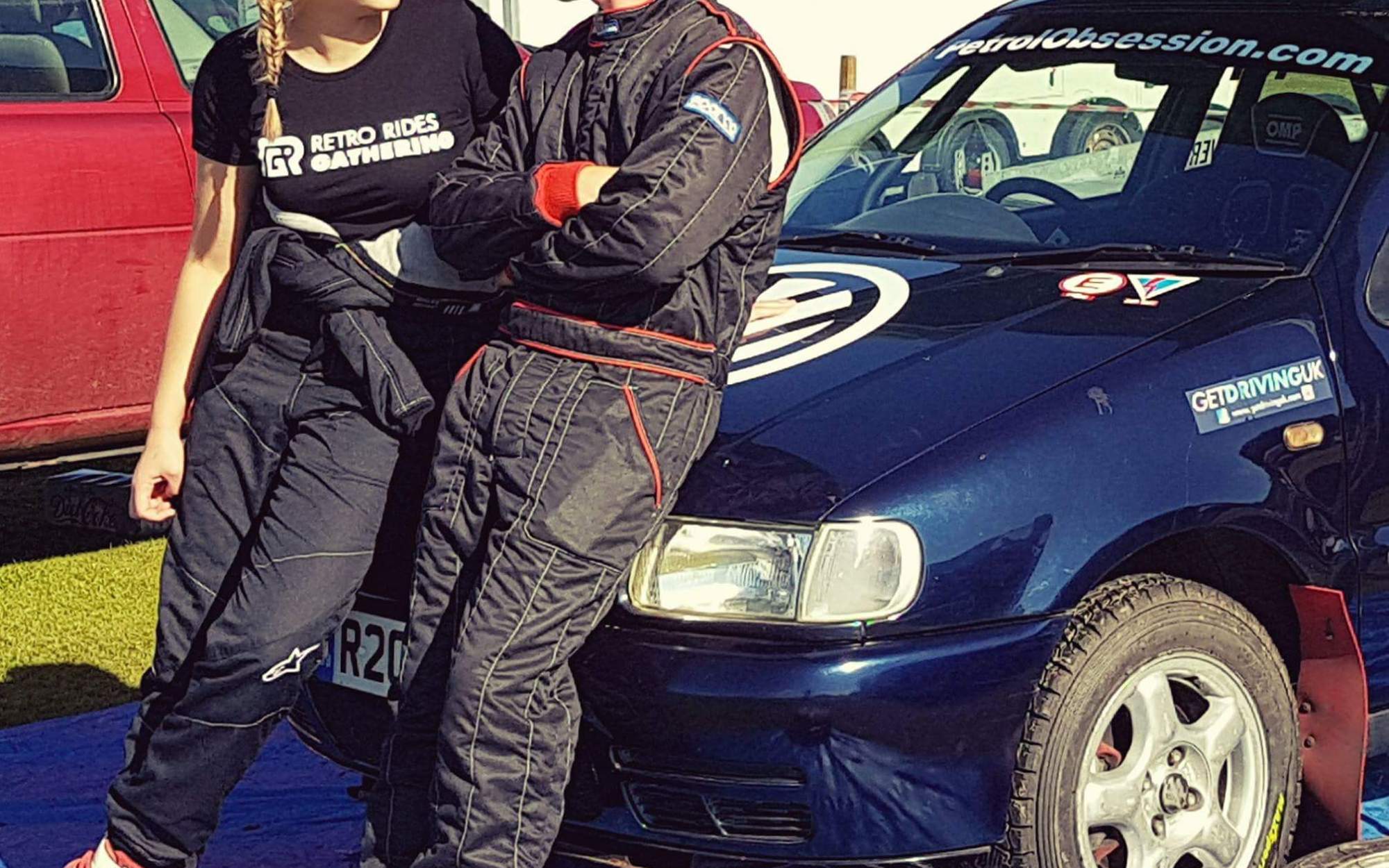 The first two outings in the Polo rally car proved to be a tremendous failure. Despite the car performing perfectly on the road, the minute it got near a rally stage it seemed to get nervous and fall apart. Nicky Grist Stages in 2016 saw us drop out on special stage one with what later turned out to be a faulty rotor arm in the distributor. Woodpecker stages in 2016 saw us stop after the start of special stage 2 again with mysterious distributor drive pin breakage. For our return to Woodpecker stages in 2017 our main plan was to finish the rally. The car was put back on the original distributor instead of the new parts that failed; I purchased two spare used distributors and built one good one from them to keep in the car. A few other bits of tidying up like replacing the bent front subframe (previous owner damage), fitting a new radiator and some new Petrol Obsession stickers.

The day started well, bright sunshine, car running happily, no problems at scrutineering and we got to the first special stage on time. Steady away for the first stage, all that money and time put into getting us to the rally would be wasted if we didn’t even make it through one stage. No dramas on stage one other than the out dated technology that passes for an intercom system not working, but while waiting in the queue for special stage two the coolant temperature gauge started creeping up. The marshals said nice encouraging words like “it’s probably just a bit warm and pushing some out the overflow”. I ran with their optimism and took to the stage with the odd puff of steam out the bonnet. Every time the temperature needle crept up the gauge the knot in my stomach tightened but fortunately my mechanical sympathy didn’t stretch to actually stopping to check anything. Besides going the wrong way by effecting a perfect handbrake turn round a hairpin junction that wasn’t part of the route we finished stage two with a functioning Polo. Just. The cooling system was distinctly unhappy. Luckily our Sponsor Get Driving UK had volunteered as a management service vehicle for this rally, by the time we got to them the coolant temperature was well into the red and steam flowed steadily from under the bonnet. We threw some water in and carried on. 100 yards down the road and the boot flew open and had to be tied shut. A great morning rallying so far. 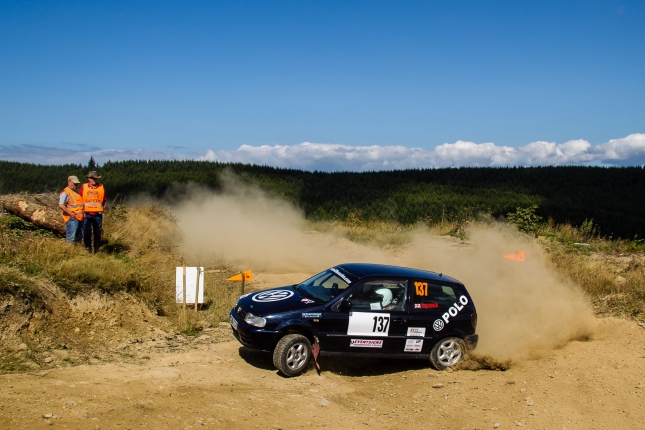 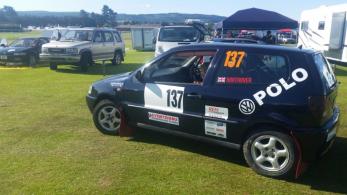 Over the rest of the day we played temperature gauge roulette. Daring the car to overheat more and more as the day went on and throwing water in the radiator at every opportunity. By an amazing stroke of luck and testament to VWs build quality of that engine we made it to the final stage. This was a biggy. 18 miles of forest gravel road lay between us and actually completing a rally in the Polo. The first mile went well, but then the troubles started when the boot flew open again; adding opposition to the Polo’s fight against overheating. On some of the longer descents we resorted to turning the engine off or running low revs 5th gear just to get the temperature down. By the halfway mark the engine got so hot that on a 5th gear straight the car died and almost came to stop, we thought we were out, the disappointment was obviously noticed by the little Polo and it broke through the pain barrier and spluttered back in to life.

The next challenge we came across was a long straight through a dip and a left fork up the otherside, knowing the engine was struggling I wanted to use the momentum from going down to carry us up, but at the bottom the left fork junction was tightened  with a chicane and a drop between the left and right forks if you got it wrong on the exit. Choosing to ignore the risk of falling off the edge I threw the polo into the chicane, pinned the throttle, closed my eyes and hoped for the best. With some shrieking, followed by nervous giggling we made it through. Unfortunately not unscathed, which became apparent a mile or so later when the rear tyre went flat.  A few miles of uncontrolled skids as the rear end of the Polo kept trying to overtake the front and eventually the tyre peeled off the rim. We completed the final part of the stage with the rear tyre disintegrating and pulling apart the bumper and wheel arch. Crucially though, we finished. A speedy wheel change, some more water added and a careful drive back to the final check control and we were ecstatic with our achievement; finally we completed a rally in the Polo. 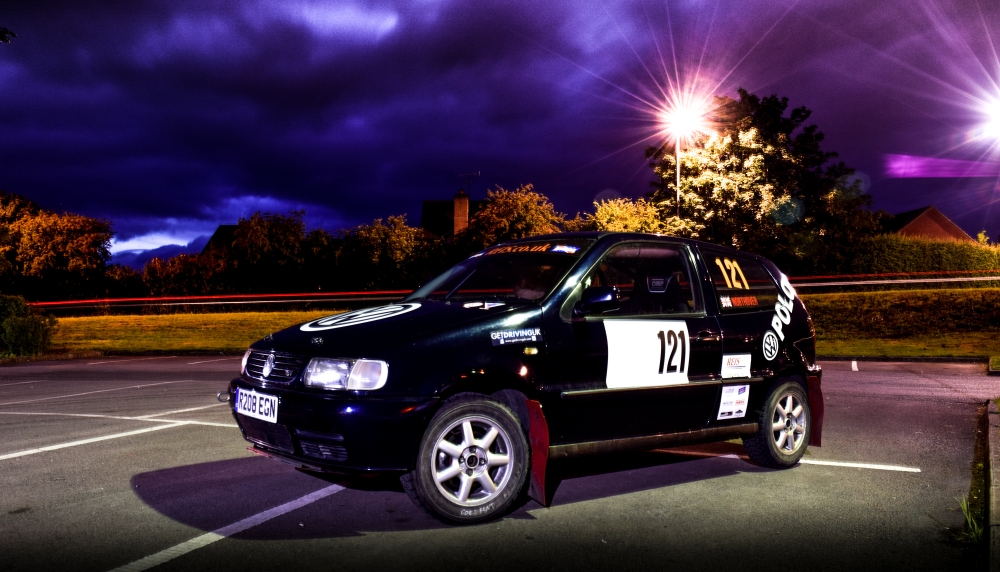 My personal history of not finishing rallies goes back further than the Polo too; my one outing in an Impreza ended with rear hub ejection on stage 4 and my last BMW rally was thwarted by a log to wheel interface on stage 5, don’t cut, bang. That’s 5 rallies in roughly 5 years without achieving a result. Needless to say we didn’t place particularly high this time, but we weren’t last and some of the stage times were promising, all things considered. Bring on next year as we spend the rest of this year recovering from the cost and preparing the car for another outing.

That is how I originally thought I would finish this post. Unfortunately after I slaved away ripping out the old polo engine and putting a nice, shiny low mileage one, which runs so much better than the original, we looked at the feasibility of hitting a whole season of rallying next year. The results weren’t pretty. No matter how many times you add it up, one weekend stage rallying is easily £1000 and that’s before you break something, replace any tyres, eat some food, buy insurance or service the car. We dwelled on the decision for several weeks, trying to decide if we actually needed to eat or run central heating next year. Finally we decided to let the car sale decide, if it sold then rallying was done, for now. So here we are in the run up to Christmas and the new owner is enjoying our Polo hopefully he will have more success after we ironed out the issues. I’ve finished sulking about the end of our rallying career helped by buying a new project to fill the void; buying an old Japanese, rare, turbocharged, barn find can’t be more expensive than rallying can it? 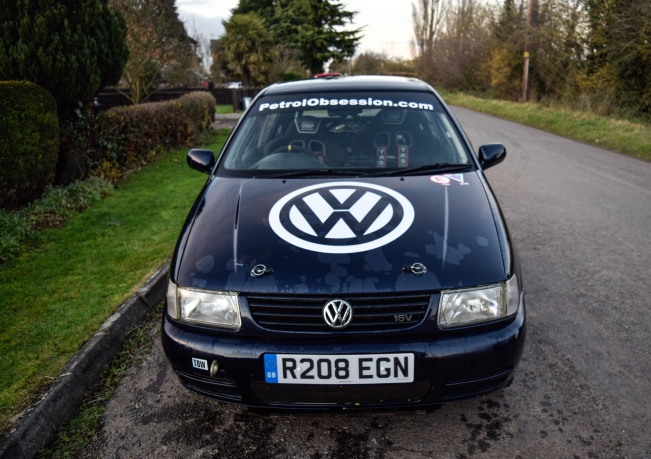